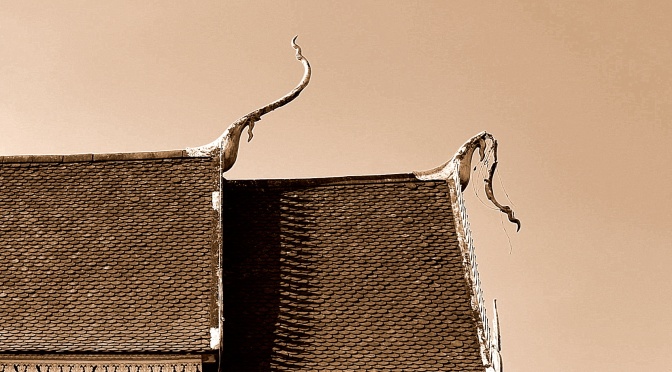 The Angkor Wat was built as a Hindu temple, supposedly dedicated to Lord Vishnu, the Protector. Over many generations and time, the King’s descendants’ faith swayed towards Buddhism. So even though most of the main temple retains its Hindu characteristics, the new buildings in the complex are definitively Buddhist. As we were drifting around the compound, looking for a spot of shade, we chanced upon this Buddhist temple – plain and unadorned in comparison to the Angkor Wat, but a symbol of Cambodia’s present juxtaposed with its past.

Chofas are characteristic to Buddhist temples in and around Thailand – these horn-like roof ornaments are usually gilded in the Thai versions, but this one’s were rather modest; and three intact, one broken.

Read more about the Angkor Wat:

Go on, tell your folks:

7 thoughts on “Down, but Not Out at the Angkor Wat”

Escapes from an office cubicle with three weeks of annual leave

You've heard it before - young dreamy-eyed person goes abroad and falls in love with travelling. Fast forward to the present and a not-so-young me still spends all of her office leave and a disproportionate share of her money on trying to see the world.