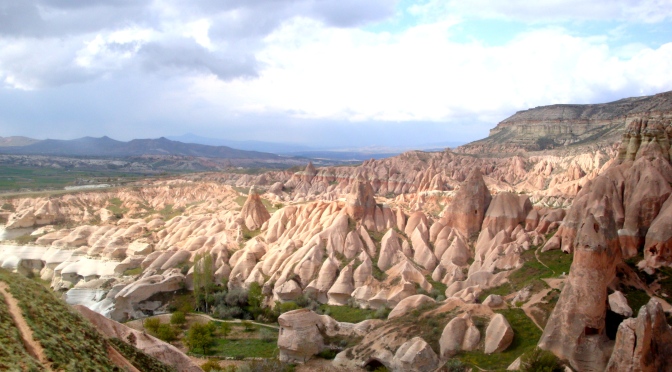 We were in Turkey in April 2013 and Cappadocia (with Goreme as the base) was our second stop in the country. After a cloudy, stormy first day in the area, we were absolutely thrilled when the clouds began to clear on Day 2.

Having received very strong recommendations, we headed to the Goreme Open Air Museum as our first sight for the day. Maybe we had the wrong expectations, but it turned out to be a bunch of ancient cave churches with long, snaking queues of senior citizens and high school tour groups. After an hour of under-appreciation of the place, we decided to cut our losses and head to the next thing to do on our agenda – hiking in the valleys of Cappadocia. On a recommendation from our pension’s front desk staff (lovely place that cave pension, but a post on that later), we zeroed in on the Rose Valley. A personal guide and a drop and pick-up came for a nominal price (when split across four of us) that I fail to recall. END_OF_DOCUMENT_TOKEN_TO_BE_REPLACED

Go on, tell your folks:

Escapes from an office cubicle with three weeks of annual leave

You've heard it before - young dreamy-eyed person goes abroad and falls in love with travelling. Fast forward to the present and a not-so-young me still spends all of her office leave and a disproportionate share of her money on trying to see the world.